For years, I thought I knew a whole lot about a whole lot.  I had an opinion for everything, many of which made it to the pages of this blog.  I’ve had so many people email me and message me requesting past articles and commentaries that I’ve since deleted.  Sometimes, people completely understand why I’ve deleted certain things.  Sometimes, people actually get pretty upset.

But when you’re broken and convinced you know nothing – there’s a lot of room for God to move.  And when God moves, I try to listen.  And when He whispers to me to remove posts and realize I’m judgmental, I’m brought to my knees.  Be open to God’s correction, and He will speak.

The truth is, life – it’s a journey.  If we aren’t journeying, we aren’t living.  And for the Christ-follower that means seeking constantly how we can become less like us and more like Jesus.  So, sometimes, that means deleting a post or two and wishing you could delete a few chapters or at least sentences of your past life.  Things you’ve said.  Things you’ve done.

Over the past several years, I’ve had the insane privilege of meeting people of all races, religions, ages, walks of life – and I’ve realized something:

I’ve experienced very little.  My life has been shamefully easy.  I rarely do hard things.  I have no right to place my opinions or judgments on anyone.  I am insanely under-qualified to offer commentary to people’s lives.  Because unless I’ve walked their exact walk, who am I to say anything about their choices?

See, a lot of Christians like to judge.  And that’s why so many non-Christians think we’re a big pile of hypocritical, two-faced punks.  Because, often, we are.

You’d think I would remember how I felt when I was so harshly judged for ‘getting pregnant’ when I was 20.  I was the ‘fornicator’.  Sinner!  Sex before marriage, how ‘disappointing’.  But, did anyone who judged me ever really see the soul of the girl?  The soul of the boy who wanted to marry her?  No.  The judges saw the perceived ‘sin’, not the people behind it.  And it cut deep.  So deep, we’re still healing from some of the words that were spoken to us.  We didn’t need judgment, we needed love and support.  And thank goodness for those that loved us unconditionally and embraced us in a hard time.  Because look how God redeems and look at our marriage and these three beautiful gifts God has given.  And oh boy, look at the lessons we’ve learned and the story that’s been written on the pages of our crazy life.

Over and over I read posts and comments and quotes about how terrible abortion is and how the world is condemned and how we ought to fight, fight, fight for what is ‘right’.  People post things on Facebook that make me choke. I sit in tears and wonder where in all this is love?

We preach love, but we speak words of judgment.  We show pictures of aborted babies with no thought of the mother who sits in a corner, gripping her stomach when she is reminded of the pain she went through.  We reject the homosexual and tell him he’s a sinner – but we fail to look at our own lives and ask what reeks of sin around our house.  We want to have opinions, opinions, opinions.  Because opinions are so much easier than actually getting off our butts and extending love.  Let’s just judge the gay, the prostitute, the liar, the cheat… let’s spend so much time judging them that we never have a chance to look within our own selves.

I’ve heard people say, “Love the sinner, hate the sin!”.  I have a better idea.  How about, we love the sinner (as in, we love EVERY ONE), and we hate our OWN sin.

Because behind every ‘sin’ is a person.  A person who has been hurt and who is hurting. (Aren’t we all hurting in some way?)  They need a friend.  They need an embrace.  They need someone who will calmly sit by them and whisper the ‘me too’.

God has plunked the hurting and the so much better than me right in my lap and I’ve sat and I’ve wept with them and I’ve listened.  Listened to the story of their life.  Wept the painful tears that burn into the memory forever.  Screamed out to God the “WHY?!”  Yes, I’ve sat broken and contemplated everything I do not know.

And I’ve realized that divorce, prostitution, abortion – these are all things not far from my own spirit.  I am the prostitute.  I am the divorcee.  I am the women who could have aborted a child if I was walking that path.  We are all one in each other and we can all bleed on one another if we allow it.  We need to stop pointing fingers and start extending a passionate embrace.  If I was in their same situation, what would I do?  Most likely, the same as these dear friends have done.  Because hopelessness cuts the spirit in two.

And hopelessness is my problem as a follower of Christ.  For every hopeless person in this world, there is a Christ-follower who is not in their proper place, standing beside the broken one.  We are to walk beside the hurting.  And so often we don’t.  We’re too busy having our opinions.

I was too busy living my cake walk.

I know what the scripture means when it says, ‘blessed are those who mourn’.  Because I’ve begun to mourn so deeply for MY OWN sin. Because that woman who sits hopeless is a product of our earthly sins and my own selfishness.  Love has not been my highest goal, friends.  And I’m broken.

For my own blindness and for the way I’ve judged others even in the most quiet, hidden ways- I mourn.  Because I was that person who looked at others and criticized the way they thought and the things they did.  Because I was filled with filthy pride and thought I actually knew something.

It’s like when Saul had those wretched scales pulled from His eyes.  He saw again, He saw more clearly, because first he saw God.  Christ spoke to Him and straightened His path.  It’s the original, ‘I was blind, but now I see’.

Shouldn’t that be the anthem of the Seeker’s life?  Over and over we realize, “I was blind, but now, I SEE.”

It’s Christ.  He takes the scales of our soul away and shines light where there was darkness.   Then it’s up to us to let the light overflow.

He whispers this truth: 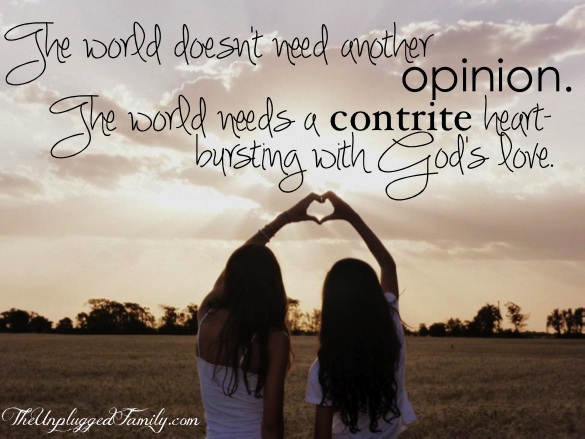 Lord, help me be this heart…