Before my husband and I were married, I was blessed to receive a free signed copy of Joshua Harris‘ book, “Not Even a Hint”.  It’s a fantastic read primarily about lust and how to guard our hearts against impurity and cling to righteousness.

The chapter that really grabbed my attention was the one about Media (of course).  In it, Josh says this:

“Here’s the mistake I’ve often made.  I know that media contains a certain amount of sinful content that is dangerous.  But instead of seeking how much I can avoid, I spend my energy trying to see how much I can handle.  I’m like a person who figures out he can take half a poison pill every day without killing himself.  It’s good that he’s not dying but can it be healthy to talk all those halves of poison pills?”
Isn’t that how we often treat our family’s media habits?  We trivialize certain forms of media and certain movies or shows because, honestly, is it really that big of a deal? 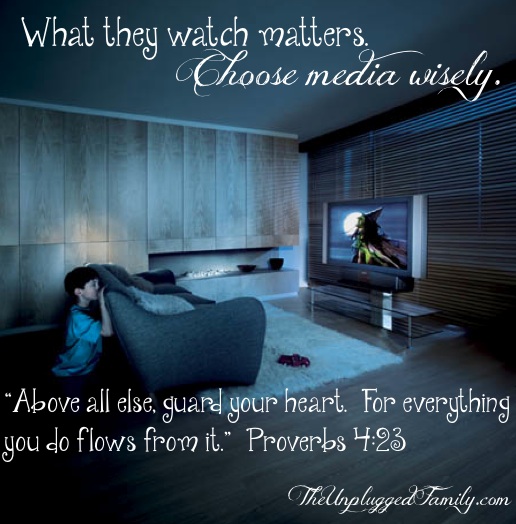 I just want to add – this post is the first of a 3-part series and the series is directed at making wise choices for our children’s media, but also wholly relates to our own choices as well.  We, as parents, are responsible to make appropriate media choices for our own consumption too, so what applies to our children applies directly to us at the same time.

So, why do we protect our kids from certain media?

My husband and I have
always sheltered our children from the majority of the media.  Because
we’ve never really had a TV, they are not exposed to television
programming or commercials.  Our eight year old is still pleased as
punch to watch Wild Kratts.  Our favorites include the original Little
House on the Prairie series and Lassie episodes from the 1950s.  Our
children have never (ever) watched a Disney movie.  Yes, we’re weird.


But, we’re weird for a reason.  I remember somewhere in the
middle of my third year of earning a Media Communications diploma, I decided I
hated TV.  Imagine!  A TV student who hates TV.  A radio host once
called my life and oxymoron, I happily agreed.  I remember I went to see “Kill Bill” thinking it was a comedy and
left 15 minutes in and almost vomited in the bathroom – I was that
disgusted by it.  Yes, somewhere around that time.

I
started researching and reading every single thing I could get my hands
on that had anything to do with media, pop culture, and how it affects
us.  How it affects our children, our hearts, our minds, our souls.  I
started looking into what scripture said about what goes into our hearts
and what we consume as followers of Christ and I started feeling really
concerned about our culture and families.

Once we had children, I decided I
wasn’t going to sit idly by while pop culture told me what was
acceptable for my heart and my family.  I decided (along with my
husband) that our family was going to be committed to thinking for
ourselves and honoring God with our media choices.

Guess what?  If you choose to be intentional about what media you and your children consume, it won’t be easy.  Many, many people will
not understand your decision to stand apart from culture.  If you
choose to steer clear of mainstream movies, literature, products, etc.
you will have to be prepared to know your ‘why’.  Because people will
ask and we want to be equipped to give a hearty, love-filled answer, right?!  YES!  So, this series will hopefully provide some great answers.

Why what they watch matters…
Part 1

“Above all else, guard your heart.  For everything you do flows from it.”  Proverbs 4:23 (NIV).  Can I suggest that as parents we can also read it this way:

Above all else, guard your child’s heart.
For everything they do flows from it.

As parents with kids growing up in 2013, we have a big job ahead of us.  The world is bursting at the seams with destructive messages everywhere you turn.  The media can be one big lion, prowling and waiting to pounce.

One thing I learned while studying media arts is media goes straight for the heart.  It’s the way it’s made and it’s the way it makes money.  We are affected by what we watch, so we watch more.  We crave more.  Our kids do too.

It’s been proven that children who watch programming that is either incredibly intense or scary to them have physical reactions of stress, deep fear, and anxiety.  Ask any teen or man who has had a problem with pornography about how images are burned into our minds.  Once they’re there, they stay.  They become a ball and chain that enslave, either with addiction, guilt or fear. 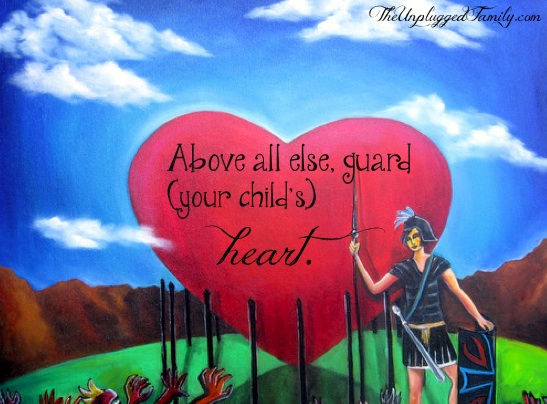 When our children watch most mainstream programming, they are literally having their hearts filled up with junk.  Junk that isn’t easily thrown away.  Rather than guarding their hearts, we are opening the floodgate to an onslaught of harmful images and messages.  Sexuality, consumerism, idolatry, sinful life styles, violence, harmful speech, confusing ideals about God and faith, scary and inappropriate images, you name it – it’s in modern media for kids.

It’s our job as parents to first limit their exposure and guard what goes in.  Isn’t that the height of what ‘guard’ means?  To put a wall up, a great big brick structure, to stand at attention, be aware, and fight to protect your child’s soul. In my opinion, this is best done by completely tossing the TV,  monitoring internet use (only in family rooms with adults present), and being extremely aware of what they are consuming.

I understand some parents will think this is extreme, but I’ve spoken to mature, Godly parents who have done this through their children’s teen years and the results have been astounding.  Solid, intelligent, faith-driven kids with a strong sense of purpose and a healthy self-image.  Kids who are aware of the world around them but not consumed by it.

As children grow older, completely stopping any consumption of negative media becomes harder, but our job remains the same.  Parents will need to adjust and start helping their older children understand the ‘why’ behind guarding our hearts from negative media.  Parents can also open meaningful conversation about pop culture and the lies we’re told.  Children can engage and develop their own sense of understanding about what God says about this crazy world we live in.

What they watch matters, and yes, media goes straight for the heart.  So, let’s put those guards up and fight for purity and righteousness in all we do and all we watch.


Part 2 is coming Friday, where we’ll talk more about how we are called to discern and how to walk the maze of knowing what is and isn’t healthy for your family’s media diet.

Linked In:
Hearts for Home